As I told in my last entry I’ll be focusing on different types of armour used in larps. This week metal armour is the subject. But when I wanted to start writing this entry, a little problem occurred. My knowledge of metal armour is very little since I don’t wear this type of armour due to physical health issues. So I invited a guest-writer: Doomsday General. For those of you who read my entries to the very last letter, or follow my page on Facebook, Doomsday General is also my editor. As before with a guest-entry, I’ve split it into two parts where I tell a little bit and where Doomsday General tells a bit. This entry isn’t a short one so take your time. Enoy! Alexjuh 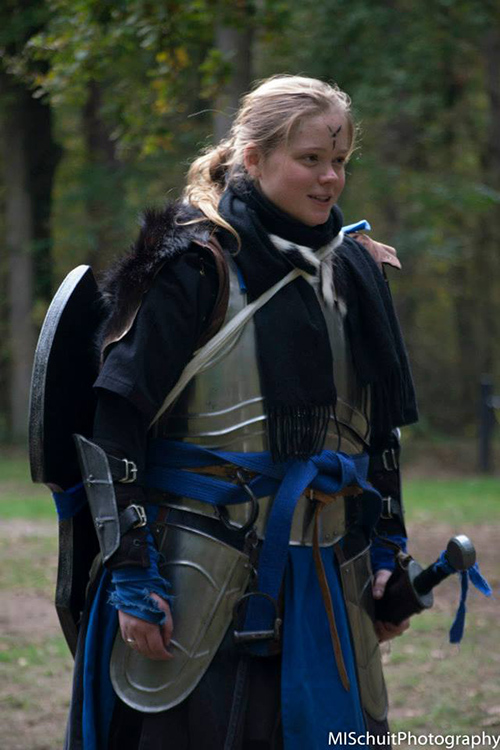 One of the most common reasons people wear metal armour is due to its high class rating. In a lot of rules at larp, plated armour is rated as the armour that gives you the most armour points; and second to that is chainmail. If you’re going to play a character which is going to fight a lot, or you find yourself at an event where there are a lot of fights, you’ll quickly find yourself drawn to this type of armour.

People also tend to buy and use this armour because it gives a look of superiority. When you’re in front of somebody who is in metal armour and claiming to be a (royal) knight, you’ll likely believe this over somebody who is only wearing fur armour. Something that often happens is that people in metal armour become leaders during the game. This isn’t always the case because you have to live up to the status, but especially within small larps (say a 100 people), it happens.

But as with everything there are certain cons to this type of armour.

One of the most common reasons people don’t buy metal armour is because it’s very expensive; in purchase and maintenance as well. The reason buying metal armour isn’t cheap is because it’s made of metal, which is in itself expensive. There’re different types of metal and some are cheaper than others. Then there is the fact that processing this material isn’t easy and takes certain skills and equipment.

Then there’s the issue that metal armour can be very heavy and painful, especially when your body type is fragile or you have physical health issues.

When you wear metal armour directly onto your skin, you’ll find yourself bruised and cut after a couple of days (maybe even hours). This is the reason a lot of people wear a gambeson. A gambeson prevents these types of injuries and absorbs sweat. But although gambesons absorb sweat, they’re thick and are thus very warm (especially on summer days). Doomsday General will tell more about gambesons.

Consider carefully if you want to wear this type of armour or not because it’s a loss to buy this expensive armour and not (be able) to wear it.

Metal armour is quite often used in larp, as it most closely resembles the idea we have of the medieval knights and soldiers; an image that inspires more than a few of us all.

The rule-wise use of armour, both metal and leather, varies greatly between different organisations and to go into the rule-wise part would be practically impossible; if you want to know how it is used at your event you’ll have to check its rules. I’ll be taking a more general look at metal armour; some of the different materials used in larp armour and a short overview of different types of metal armour for a more aesthetic depth. 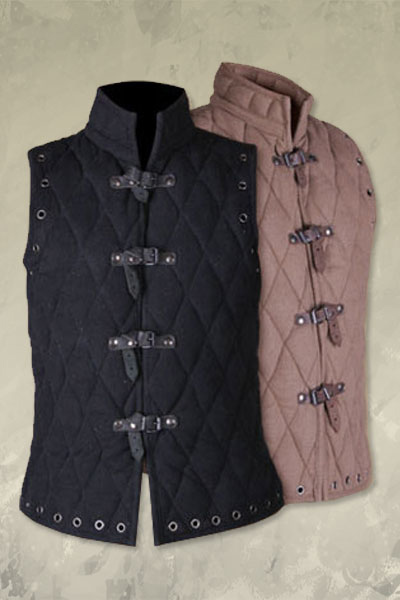 One thing that is often worn with metal armour is the gambeson, an essential part of any medieval soldier no matter whether they were men-at- arms or knights. A gambeson is a thick, padded jacked and was perhaps the most used form of protection on the medieval field of battle. The gambeson was made of linen sewn in strips which were filled with various materials like cloth scraps, wool or horse hair.

In larp a gambeson can be used as armour in itself, but this depends on the rules of the event. Mostly, a gambeson is worn to alleviate the wearing of chainmail or plate armour and therefore it’s made considerably thinner than a historical or re-enactment version.

Wearing a gambeson is certainly advised for people who want to wear metal armour at larp, because the weight of the armour is rather heavy on the shoulders. And since larp is a game where anything can happen at any time, taking off your armour isn’t always something you’ll want to do. 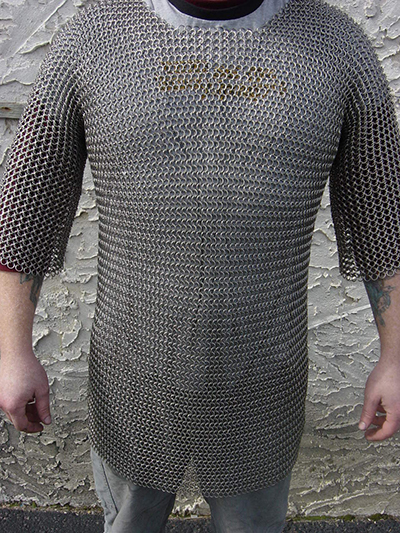 In this case I mean use of small metal components to reinforce something or make a piece of armour entirely. Examples are the commonly known chainmail hauberk, scale armour or scale mail and plated mail.

Chainmail hauberks are shirts made of metal rings that are linked together; besides the hauberks there were also trousers, gloves, etc. made of these interlocking rings.

Scale armour consists of, as the name implies, many metal plates overlapping each other like fish scales sewn onto leather or thick cloth.

Plated mail consist of metal straps or plates incorporated in other forms of armour such as chainmail, or even directly onto leather straps to form what is also known as ‘splinted armour’.

A brigandine, or coat of plates, is a leather vest with metal plates riveted onto, or into, them, and was very common for the foot soldier.

Laminar armour consists of many horizontally overlapping, solid metal plates. The most famous example of laminar armour is the roman lorica segmentata. A variation is lamellar armour, which consists of various metal plates stitched together to form horizontal rows of plates. The difference with scale armour is that the plates don’t overlap and that lamellar armour doesn’t need cloth or leather to hold the scales together. 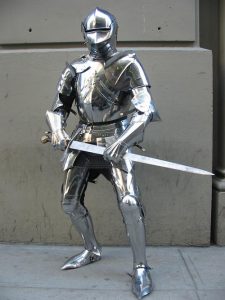 Plate armour is, of course, the full plate armour commonly associated with knights. And although there are many different styles and versions of full plate armour (such as the later battle, ceremonial and tournament armour), they were all made roughly similar. At least they’re similar enough to be of little consequence in larp.

It’s practically impossible to incorporate the differences between all these kinds of armour into a viable larp rule-system. Therefore it is often done as something like ‘class 1, being leather armour; class 2, mail or reinforced leather; and class 3, plate armour’.

For now we shall dismiss class 1 altogether apart from the note that a gambeson is sometimes counted as class 1 armour. Class 2 incorporates practically all the afore mentioned ‘mail’ types; chain mail, splinted mail, scale armour and also brigandines and lamellar armour. Class 3 consists mostly of plate and laminar armour. Within these classes there is often no difference between wearing, for example, a chainmail hauberk or a brigandine. Pure aesthetical appeal is within a class the only reason to choose a certain type of armour for a player. It’s always an idea to consult the organisation about the classification if you’d like to use a less common type of armour.

Larp armour comes in a variety of finishes and materials used to increase longevity or comfort. Not everyone appreciates every trick used but this is very personal and should only be factored in if you yourself think something is not to your liking.

Some armours are made of stainless steel, a trick that is very thoughtful of the armourer as it means that your lovely (and generally rather expensive) piece of armour requires a lot less maintenance to keep it nice and shiny.

Another trick used by a lot of producers of mostly chainmail and scale armour, is to use aluminium rings as it reduces the weight of the hauberk considerably and thus makes it more comfortable to wear for a few days in a row. Also, chainmail hauberks come in both riveted and non-riveted versions; the riveted version is more expensive but it lasts a lot longer because it doesn’t lose its rings as eagerly as a non-riveted hauberk; something than can become a real headache.

Metal armour does need a certain care, as all costume pieces do, and since metal is prone to rusting if it comes into contact with water (rain, sweat) it requires a little bit more care. Preventing rust is usually better for your armour than dealing with it afterwards and in essence it isn’t that difficult albeit it’s time consuming. When you buy metal armour it usually comes greased (plate) or oiled (chainmail) and the best thing is to remove this grease or oil with mineral spirits and a cloth for plate and an oil solvent for chainmail. Then your armour is ready for use. After use, clean the dirt from your armour and for plate apply a coat of wax and for chainmail a coat of water-displacing liquid such as vegetable oil or WD-40. Repeat this process before every use of the armour to keep it nice and clean.

One thing you should be aware of when buying metal larp armour is that it’s generally made of far thinner sheets of metal than re-enactment armour and therefore it should never be used on a re-enactment event as you’re certain go incur some nasty wounds!

For the ambitious craftsmen amongst you, rings, plates and scales are readily available on the internet in a variety of colours and metals to allow you to create your own pieces of armour for a not to breathtakingly high price.

So, if you want to wear metal armour at a larp event investing in a gambeson is a really good idea; it allows you to wear your armour with a lot more comfort than without. And as far as differences in metal armour; almost every style of armour is possible and it is entirely up to yourself to decide what kind you like best; although keep in mind that metal armour never is cheap and as a new larper it might be a bit over budget to start with.

Special mention for this entry: Doomsday General. Thank you for your input on this topic and for helping me with translation, grammar and filtering out little mistakes. 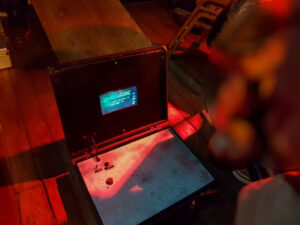 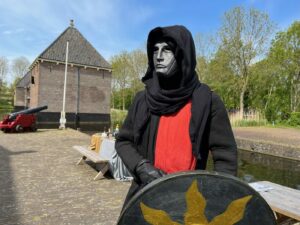 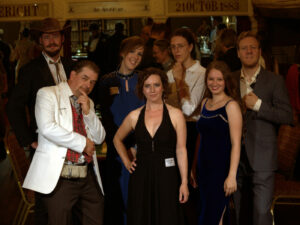 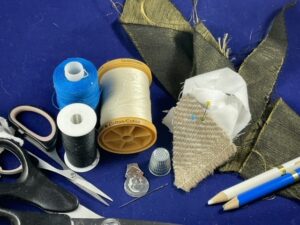